Visit the Mekong Delta & Uncover the Origins of SE Asia 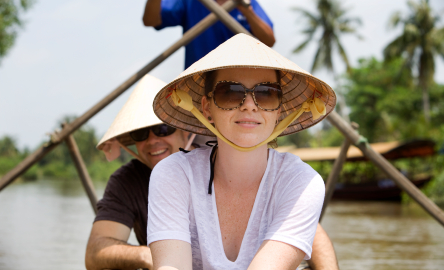 Luscious trees line the banks of the Mekong, reaching downward for the shiny surface as a mysterious mist rises early in the morning. An enormous volume of water infused with exotic species and ancient civilization, for thousands of years, the river has been the original source of life in Southeast Asia and today it is still there to be explored. Taking a Mekong Delta day tour  is a ”must do” in Vietnam, but this only scratches the surface, as the entre region is an assault on all senses and a once in a lifetime experience.

Natural, vast and diverse, the Mekong Delta is an awe inspiring place, from the myriad of boats which form part of a frenetic floating market, the vast array of produce in each one, the crocodiles lurking near the river banks and the unforgettable vistas of a river that brings life to the region each day. It is also a sea of colour, for the diversity of such natural surroundings are emphasized further by the colours of the locals attire and the coconuts, spices, flowers, noodles and succulent meats which are found in the markets. And then there are the people themselves, friendly and primitive, meeting the locals in the Mekong Delta is a humble occasion in which you can gain a real insight into the old world and uncover traditions that have existed along this river over the centuries. 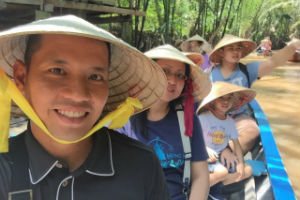 When you visit Vietnam, it’s hard to remember that such a place exists, for the history of recent war is overwhelming and at times, almost definitive of its popularity as a tourist destination. However, the incredible eco-system in the Delta has a way of wiping the slate clean and taking an adventure back to the humble origins of nature, and of human civilization, is one of the most refreshing experiences in Vietnam. An endless number of amphibians, reptiles and birds can also be found here, along with stunning mangroves, smaller inlets and a wide expanse of powerful water. If there is one thing you will take away from this tour of the Mekong Delta, aside from the wonderful locals, it is likely to be the grand scale and widespread mystery that envelops the entire region.

Visiting Vietnam will always be synonymous with uncovering war and recent tragic events, but its important to remember the origins of this incredible region and in one of the best tours from Ho Chi Minh City you have it all, an ancient peoples, a diverse eco-system, a chaotic floating market and an unforgettable journey.